How to use social media in business?

Social media is over 10 years old, but are you sure you understand them?

Linkedin was launched in 2003, Facebook in 2004, Twitter in 2006 ... these tools are now entering a phase of maturity and require us to approach the subject of social Web and social media differently from the angle of use. But first and foremost, the enthusiasm of recent years has made many lose sight of the fundamentals of marketing and the social Web. This has a certain impact on the effectiveness of the actions taken by the brands which are becoming increasingly advertising, less adaptive, and by nature ineffective. It's time to rediscover the fundamentals of the social web and social media to make good use of it.

The curve of adoption of social media 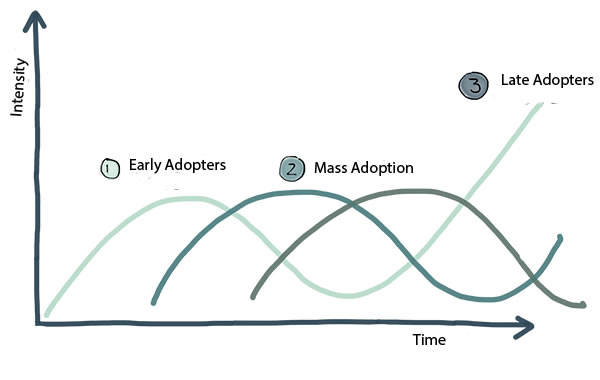 Neither all sectors nor all brands started at the same time on social media. But a late start is not necessarily synonymous with a definite delay. It is indeed possible to see things differently, to consider that starting later, apart from the fashion effect, allows you to work efficiently and more professionally by adapting better to the specificities of the medium.

The curve of adoption of social media is not uniform because not all sectors and all brands are at the same level. However, you shouldn’t arrive at the conclusion that one state is preferable to another and that, if you are on curve number 3, being out of phase is unacceptable. Better to arrive late on a field indeed, and to do the things right, than to arrive too early and adopt ineffective policies. We have come across cases wherein there were many brands on the social media a few years ago, which were so busy developing the technical skills of their teams to refine the "engagement rate", that they lost sight of the goal at the same time they redoubled their efforts.

Social media: back to basics

As a matter of fact, the period of Web 2.0 is indeed over and we have entered the era of "mass social media", where brands, encouraged by networks that seek to monetize at all costs, prefer to pay to promote their social media publications. This is how many brands have approached the subject, especially in the consumer markets, and we reckon that this is a serious mistake.

You can treat social media as mass media ... but they are not as such

Social media do not really address uniform masses, they are more a business of micro-communities that discuss and are joined together by affinities existing between them.
They are not true media in the traditional sense of the word and cannot be compared to mass advertising media .
It is therefore imperative to be able to realize the fundamentals of word of mouth marketing.
Returning to fundamentals is not a question, but an obligation for brands that aim to succeed in their word of mouth marketing endeavors; in order to do so, they must take full advantage of the power of social media.
What we have learnt on the ground is that the faster the world goes, and God knows that the Internet is going fast, the more you have to hang on to fundamentals so you do not forget the basic rules.

Let's see why we have to ask the right questions

to focus on the why and not on the how

Mastering the tools and content of social media is important, as well as knowing a minimum of technical tools, not only for the community managers but also for every social media professional. This, in essence, is obvious and does not need to be questioned.

What if social media could be used for something better than going around in circles to "improve engagement" ? This question needs to be asked.

However, the more we read about community management and social media blogs, the more we feel we're missing out on the right question. We became aware of this when we recently met with one of the ecommerce leaders, particularly its social media director, and began to retrospectively look into their strategic evolution through social media. Their presence has fluctuated over the years, and although they have been active for only three years, their path seemed very close to what can be observed in case of a majority of companies (B2B and B2C included, even if there are differences).

At first, all went crazy on corporate social media

Initially, some innovators became part of this new trend more timidly, then with frenzy and with a myriad of initiatives, and some of them aimed at collaborating the work. This frenzy had generated a lot of beautiful initiatives, but also a growing load of customer requests for better service, better advice and a better relationship- things which have not always found their answers. 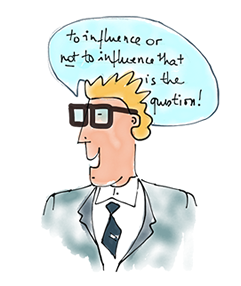 The next step was a fragmentation of this social media presence with even more companies jumping on the band wagon at a time when social platforms gained popularity in early 2011 and 2012.
The last phase brings us to 2014 with Community management getting more "professional", with many agencies (at significant prices) feeding Facebook just for the pleasure of feeding it. All this tended to make social media a lot more superficial than it used to be.

The Romans had an expression for this: panem and circenses. Give the people bread and games, and they will be happy. The Roman Empire had kept peace in its provinces like this, without having to worry too much about long-term policies. This reminds us of what we are experiencing today on social media . In fact, we encountered this problem ourselves while we were in charge of the web and social media activities of large European groups.

Facebook has its own rules. If you want to maximize "engagement", you will have to entertain and keep entertaining your users. We discovered that the only way we could generate "engagement" - whatever the meaning and degree of understanding of the term - was to post more or less funny stories about mobile phones. We could have even promoted our posts, so as to artificially raise the "engagement".
Truly, this is a very interesting technical web marketing prowess, but why are we doing this? What really matters to its end customers is the service you give them, the quality of your products, and the relationship you have with them ... unless you are working in luxury, beauty or fashion, but even so, not all brands are Louis Vuitton or L'Oreal.

There is much more to do with social media

The reality on the ground is that we do not have to jump on the band wagon. Let’s just stop doing that; there’s a lot more to be done with social media. It is therefore high time that we decide to change the way we work before it is the world that changes the Community managers and that they begin following the hard path taken in the 2000s by the late webmasters.
In 2012 already, Chris Brogan wrote a paper titled " social media is not dead, they are just boring ". It is our role to focus on the why aspect and not to work on social media for the sake of doing social media, so that we avoid turning our business into a boring and technical cyber babble. There are so many interesting things to do with word of mouth marketing on social media, and fortunately not just on Facebook. But, such things work out only if brands decide to focus on their customers and their audiences.

Above all, communities are not built through internal collaboration . It's the opposite; the communities, if they exist, are cajoled and animated (and not "managed") by all the entities of the enterprise that are at their service.
In order to fulfill the dream of seeing your business grow, "creating" your community is a myth and will remain so. It is not the business that builds a community, but the community that shapes, through its desires, needs, willingness or unwillingness to cooperate, a business. Your business! This is the true new paradigm, and not the "Facebook edge rank" that everyone, especially decision makers, laugh at and they rightly do so.
Social media is in a phase of maturity, but many brands are still on their way to find the essence of this movement. It's time to change your opinion on social media !